Why is Helium Used in Vacuum Leak Detection? 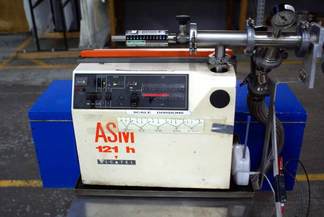 Helium Mass Spectrometer Leak Detector
Helium mass spectrometer leak detection is the most common form of leak detection used in high and ultra high vacuum systems. Helium leak detectors are routinely sensitive to leak rates in the range of 1x10-11 std cubic centimeters per second. Practical leak testing of systems to leak rates in the order of 1x10-9 std cc/sec is standard industry practice. To give this some perspective, a 1x10-9 std cc/sec leak is roughly equivalent to a release of 1 cubic centimeter of gas in 30 years. So the leaks being detected are very small. Mass spectrometer tubes can be manufactured to detect other gases, Residual Gas Analyzers do just that, separating and measuring a range of gases. So why is helium the “go to” gas for leak detection?

Multiple sources agree on these important reasons.
​If this article was of interest to you, drop us a line and let us know. Your feedback will help us determine what type of content you would like to see in our newsletter and posted to the website.