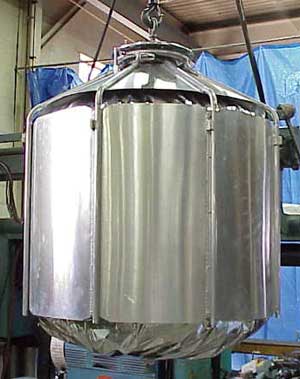 Liquid nitrogen Dewars with carefully designed vapor cooled thermal shields have been used to achieve very long holding times in instruments for space flight and balloon borne applications. Vapor cooled thermal shields may be constructed by diverting all or part of the cryostat boil-off through cooling coils attached to thermal shields. In sub-Kelvin cryostats, for example, vapor from an evaporation stage may be drawn off to cool a 1K heat shield while vapor from a separator pot cools an outer 4K heat shield. In storage dewars it is more common to heat sink nested heat shields at the dewar neck.

Boiling a gram of liquid helium at 4.5K absorbs 21 J of heat. Warming a gram of helium vapor from 4.5K to 300K requires 1550 J of heat. Effectively using the enthalpy of the cold helium vapor allows liquid helium vessels to achieve very low boil-off rates. Traditionally, many laboratory liquid helium cryostats and magnet dewars have employed liquid nitrogen cooled thermal shields to intercept heat from surrounding 300K surfaces. Typically, we would expect the heat flux from 300K to an 80K surface insulated with a thick MLI blanket and with a good isolation vacuum to be about 1W/m2. If this 80K surface surrounds a 4K surface, which is also well insulated, then we typically expect a heat flux of about 0.1W/m2 on the 4K surface. The liquid nitrogen cooled thermal shield, in effect, absorbs 90% of the heat flux at a much lower cost than would be achieved if the 4K surface were not shielded. Can we expect to do as well with a vapor cooled thermal shield?
​
Suppose that we have 10 liters of liquid helium in a spherical vessel. Our target is 0.1W/m2 incident on the 4K vessel with a heat shield at 80K. If the vessel is spherical then for a capacity of 10 liters its radius would be 13.6 cm and its surface area would be 0.22 m2. Assume our heat shield then has a radius of 16 cm. The heat shield would have a surface area of 0.32m2 and would intercept about 0.32 W. If we have 0.1w/m2 incident on the 4K vessel then liquid would boil at a rate of:
(0.22m2)(0.1W/m2)/(21J/g) = 0.001 g/s
The specific heat of the helium vapor is about 5 J/gK. If our target temperature of the shield is 80K then we have available:
(5J/gK)(80K-4K)(0.001 g/s) = 0.38W
which is adequate to offset the 0.32W heat load. Of course, we have not accounted for any heat leak through supports and connections and we have not allowed volume for ullage. However, the estimate would suggest that a well designed vapor cooled shield should be able to perform almost as well as a liquid nitrogen cooled shield. This turns out to be the case; many helium dewars with vapor cooled leads do have holding times that approach those of liquid nitrogen shielded dewars.

​As specialists in Cryogenics, Vacuum and Pressure Technologies, Meyer Tool’s engineers can assist you in your specification and design requirements. We work with our customers to Reduce Project Risk and achieve the lowest total cost of ownership through knowledgeable design and robust fabrication techniques.