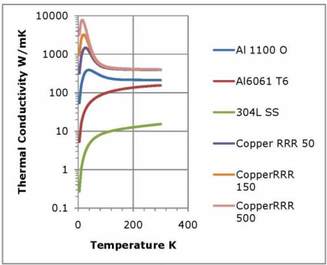 Figure 1. Thermal conductivities of selected metals as a function of temperature. Data from NIST.
Thermal conduction is the process by which thermal energy is transported through matter. It is closely related to specific heat, the quantity of thermal energy contained in a substance. Both quantities are influenced by similar factors. One good source of data on materials at low temperatures is the NIST cryogenics group web page at http://cryogenics.nist.gov. 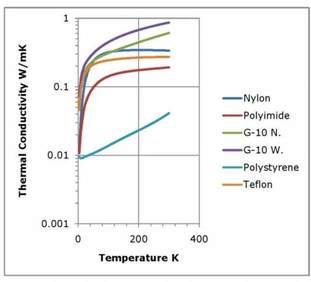 The thermal conductivity of plastics may be modified with additives such as aluminum oxide. Thermal conduction in plastics, as in all nonmetals, is due to lattice vibrations. The lattice of amorphous materials lack the large-scale regularity of crystals, and lattice vibrations cannot propagate over large distances. Even plastics that are considered to be crystalline, such as nylon, do not have the same degree of order that is found in crystals such as quartz or sapphire. As a consequence, plastics as a whole have very similar properties. The thermal conductivity of G10, widely used to make supports in cryogenic equipment due to its favorable mechanical properties, has a slightly different thermal conductivity normal to and in the plane of the filler.

​The Engineering Department at Meyer Tool has the knowledge and experience in cryogenic equipment to successfully incorporate a range of materials to achieve your design goals. Put this expertise to work for you in your next project. If this article was of interest to you, drop us a line and let us know. Your feedback will help us determine what type of content you would like to see in our newsletter and posted to the website.