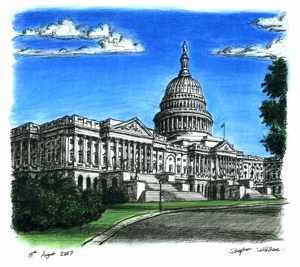 Capitol Hill
Meyer Tool & Mfg., Inc. participated in the Superconducting Particle Accelerator Forum of America’s (SPAFOA) annual Capitol Hill briefing on September 14, 2011. The forum was held in the Rayburn House Office Building.  It is SPAFOA’s mission to provide a partnership between its industry members and government funded superconducting radio frequency (SCRF) programs during their design, component prototyping, manufacturing, siting and installation. Meyer Tool is proud to support the SPAFOA mission and welcomes the opportunity to participate in these briefings.

The theme of this year’s briefing was largely that “the Nation must continue strong support of superconducting radio frequency (SCRF) particle accelerator R&D to advance scientific discoveries and establish a strong U.S. industrial base to support governmental and global commercial applications.”  The briefing was well attended with 42 people representing member companies, national laboratories, the Department of Energy, and congressional offices.

The first three speakers, Ken Olsen, President of SPAFOA, Tony Favale, President of Advanced Energy Systems, and Dr. William Brinkman, Director of the DOE Office of Science, all spoke on disparate topics, but their talks all supported the underlying briefing theme: the critical nature of government support of basic Science and the nurturing of a domestic industrial base in this key technology.

Mr. Olsen outlined SPAFOA’s mission and history since its founding in 2005. He emphasized the important role governmental support of basic Science programs utilizing SCRF technology and the potential for commercial applications of SCRF technology as outlined in the recent report “Accelerators for America’s Future”. We at Meyer Tool urge you to read this report if you are unfamiliar with it.

Mr. Favale spoke passionately on the issue of building a domestic industrial base to supply the current basic Science requirements for SCRF technology and ultimately the commercial applications of the future. He cited examples of how European and Asian governments support and nurture the development of just such industrial capacity.  European and Asian governments and agencies promote policies that favor domestic suppliers in their own projects while also supporting these suppliers in efforts to export, especially to the U.S.  Mr. Favale directed a call to action to Congress and the DOE to level the playing field for U.S. companies, either ideally by helping to eliminate the barriers to bidding overseas or by erecting barriers to non-U.S. Companies’ ability to unfairly bid on U.S. taxpayer supported projects. He illustrated how Value Added Tax (VAT) rebates and current U.S. policies place U.S. companies, even when bidding on U.S. projects, at a 17% cost disadvantage in regards to European Union based companies.

Dr. Brinkman eloquently outlined how the technology of superconducting magnets was supported and nurtured by the Department of Energy, from accelerator based applications in Nuclear and High Energy Physics experimental equipment to common use in MRI and other medical imaging equipment that now can be found in strip malls throughout the U.S.   He drew the parallel between what 50 years ago was a nascent technology and is now commonplace with a large industrial base to the current state of SCRF technology.

In recent years there have been may calls to action on this and similar scientific and industrial policy issues. This includes the 2005 report “Rising Above the Gathering Storm” and the Bush and Obama administrations’ support of the “American Competes Act”.  These, and other efforts recognize how the investment in basic Science coupled with a parallel industrial policy can have an overwhelming positive impact on economic growth.  Consider how in 1843 Congress appropriated $30,000 to fund Samuel Morse’s experimental telegraph line from Washington D.C. to Baltimore. Twenty-nine years later a global communications network of telegraph lines existed.

Reflecting on these three briefing presentations we see a common thread of ideas that should be seriously be considered by members of Congress.
​Fiscal Year 2012 Funding Outlook

Rep. Lipinski spoke off the cuff, without notes on a variety of subjects.  His themes included: the connection between basic Science R&D and the development of good high paying U.S. jobs; investment in basic R&D must be made even in the difficult economic times that we are now facing; he supports strengthening the Buy American Act to level the playing field for US companies and believes a key to that is the DOE developing a plan to increase U.S. industrial participation in U.S. funded programs; he is working on legislation to develop a comprehensive Manufacturing Strategy for the U.S; mentioned Meyer Tool in the context of education and skills training for U.S. workers, a subject that we discussed with the Representative in his visit to Meyer Tool last spring.

Dr. Simon, Mr. Fisher and Mr. Byers gave honest and detailed assessments of their views on the current Congress and the outlook for funding of the DOE Office of Science in FY2012. They all seemed in general agreement on these points:
​Technical Speakers
​
Three technical speakers informed the audience about the current state of programs related to SCRF technology. These speakers and the links to their presentations can be found below.