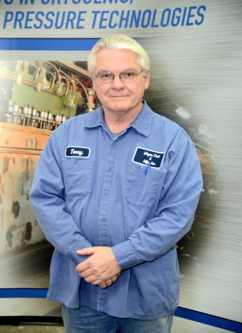 Tery Kean - Welding Supervisor
Terry Kean likes a good challenge. He likes the sense that he is going to “come to work and do something new,” within a structured environment. Having spent 29 years at Meyer Tool & Mfg. Inc., it is clear that Terry finds his work as the Weld Shop Supervisor both challenging and filled with variety.

When Terry got out of the army, he headed back to school. While studying Business Management at Harper College, he met a welder he hoped would be able to help him with the welding needed for his long time hobby: rebuilding antique cars and motorcycles. Upon seeing what that entailed, the mechanically inclined side of Terry thought, “I should be able to do that myself,” so he began taking classes in welding. Something that Terry thought he would “like to know” grew into a long term career that continues to this day.

Terry began his career as a welder for General Electric Co. before joining Meyer Tool in 1983. Over time, he became proficient in the many types of welding we do here, gaining exposure to a wide variety of welding materials, positions, and processes. He is certified to Section IX of American Society of Manufacturing Engineers (ASME) Boiler and Pressure Vessel code and is one of Meyer Tool’s two Certified Welding Inspectors. Today, as Meyer Tool’s Weld Shop Supervisor, it is up to Terry to supervise the weld staff’s daily activities with the long term vision of developing individual welder expertise so that they, too, can maintain the certifications needed for the various weld work we do here. In Terry’s opinion, “welding is a key to Meyer Tool’s success”. He believes that Meyer Tool is known for our welding and emphasizes that success as a Meyer Tool welder is not based on equipment, but rather employee skill. “The machines are not always what makes a strong weldshop,” but rather the people who wield them. “Our welders have great attention to detail and strong fabrication knowledge.” Terry knows that only “certain people, those with the right work ethic who take pride in their work and enjoy tackling fabrication challenges, thrive” in a quality driven atmosphere like Meyer Tool’s. While Meyer Tool does do repeat work for OEM customers, many projects are unique. For unique projects, the manufacturing process cannot be improved and refined over time; instead, it must be done right the first time. More often than not, Meyer Tool’s weldshop may “only do it once.” This is where attention to detail and an understanding of the process is critical.

Terry enjoys his time at Meyer Tool because of the “structure” his kind of work necessitates. Due to the “one and done” aspect of many of the weld projects, conformity to ASME standards and high attention to detail are essential. Strict adherence to drawings and standards of operations in welding work is critical due to the close tolerances needed in customer projects. By “following procedure, paying careful attention to drawing and traveler instructions and by understanding stresses and heat,” Terry feels the weld department contributes to Meyer Tool’s commitment to reduce project risk. In order to “hold close tolerance, a welder must understand the stresses and heat” associated with the materials being worked with. Over a span of more than thirty years welding, Terry is well versed in the intricacies that separate a “Meyer Tool welder,” from an “everyday welder.”

When asked about his most interesting project, Terry laughed and said there have been many over the years, but the most memorable is the work he did for the CERN Distribution Boxes. He was quick to note that many aspects of the welding required the staff to develop and qualify for new welding procedures. “The Distribution Boxes were complex, requiring special qualifications and certifications,” all of which Terry is now certified in. Additionally, the Distribution Boxes encompassed “every phase of welding that Meyer Tool does,” a rare occurrence in Terry’s experience. Unlike many of the projects that Terry oversees, the CERN Distribution Boxes were a two year long endeavor, not just a “six month thing.” Despite the project “lasting a long time,” Terry enjoyed the challenge and feeling of accomplishment it provided. He believes that the CERN project represents what is great about the Meyer Tool work environment; in fact, he states that it is because of the “challenges” and “variety” of the work he does at Meyer Tool that he has enjoyed his 29 years here.

Almost thirty years have gone by and Terry remains happy with his career at Meyer Tool. Much of Terry’s time is now focused on training a new generation of Meyer Tool welders. He says, “one of my biggest contributions to Meyer Tool is showing people that it is a stable place, that my years here are a valuable use of both my time and skill.” When asked ‘why work at Meyer Tool?’ Terry does not have a direct answer, he says that its “hard to say;” but also states that his decision to work at Meyer Tool can be found in the details, in the very things that he believes makes a good welder. He likes the “structure” required by ASME standards and drawings and he enjoys the idea of “striving to make things better.” Meyer Tool president, Eileen Cunningham, feels very lucky to have had Terry on board throughout his career. “Terry represents the ultimate example of who we are. He’s not afraid to tell it like it is, a trait that contributes to getting things right the first time. He takes pride in what we do, who we support, and the precision of our final product. He enjoys sharing his knowledge with less experienced workers, building a solid fabrication team that is able to perform to our standards now, and in the future. We could not have accomplished what we have, or be who we are today, without his influence.”

​Terry still works on his antique cars and motorcycles. A skill “he’d like to have” for his hobbies has turned into a lifelong passion and an immense asset to the Meyer Tool team. Attention to detail is an imperative skill to have in an environment that emphasizes the lowest total cost of ownership. Lowest total cost of ownership demands that a job be done correctly, the first time. There is no room for error. It is much the same with Terry’s hobby, while he says he “does it for himself,” his projects demand a high degree of attention to detail and the ability to follow a set procedure for a successful, high quality end product.