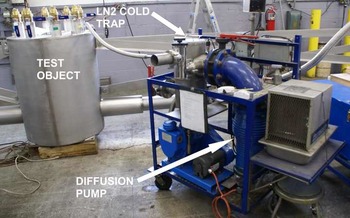 Diffusion pump in use
Today you are very likely to find a turbo molecular pump connected to a high vacuum system. Some of our visitors, on seeing one of our vapor diffusion pumps in service, seem to be totally unfamiliar with this device. In fact, diffusion pumps were the work horse of the high vacuum industry for many decades and may still be a good choice for a high vacuum pump, particularly if up-front cost is a consideration. As it has no moving parts, the diffusion pump is vibration free and is immune to the effects of magnetic fields.
​
Diffusion pumps operate by directing a jet of vapor downward from the pump inlet toward the pump exhaust. When vapor molecules collide with molecules of residual gas, the gas molecules are deflected in the direction of the pump exhaust. The vapor stream is created by boiling the pump fluid at the base of the pump and directing the vapor through a series of conical nozzles, as shown in Figure 1. The pump fluid condenses on the walls of the pump shell and returns to the boiler. The shell of the pump is usually water cooled, but may also be air cooled in the case of smaller pumps. The exhaust port of the pump is also cooled to condense pump fluid vapor and return it to the reservoir. Many pumps also include a cool down coil on the base of the boiler. This coil is used to aid the cool down of the pump after the heater is shut off and is not included in the norma

The diffusion pump requires an auxiliary pump to exhaust the system to a rough vacuum to allow the diffusion pump to start and to maintain a rough vacuum at the diffusion pump outlet and exhaust to atmosphere. Usually a single pump performs both roughing and backing functions with valves to switch between the two operations. This pump is often a rotary vane pump. With a valve at the pump inlet, this arrangement makes it possible to let the chamber up to atmospheric pressure and then to rough it out and reconnect the diffusion pump without shutting the diffusion pump down.
​
For many decades, mercury was the pumping fluid in almost all diffusion pumps. Concerns over the health effects of mercury have caused it to be replaced by organic oils. Hydrocarbon oils were used for many years. Today synthetic fluids, including silicone oils and polyphenyl ethers, are common. Some of the fluids have vapor pressures as low as 10-10 Torr at room temperature.

It is important to avoid exposing a hot diffusion pump to elevated pressures, as might happen if a high vacuum valve were inadvertently opened before the chamber is roughed out. The sudden inrush of gas will carry oil vapor throughout the system. Furthermore, while diffusion pump oils can boil without decomposition at reduced pressures, suddenly increasing the pressure will cause boiling to cease, the temperature to rise, and the oil to decompose, particularly if exposed to air. Some halogenated pump fluids can produce hazardous vapors under these conditions. Some fluids are more resistant to decomposition than others. If a hot diffusion pump is exposed to high pressures, then it may be necessary to dismantle the pump, thoroughly clean the interior and replace the fluid in order to restore the pump to operation.

Some backstreaming of diffusion pump vapor from the pump into the chamber is unavoidable due to the random nature of molecular motion. Backstreaming is defined as the amount of pump fluid vapor that travels towards the chamber rather than away from it. Backstreaming can be made worse by operating the pump at elevated pressures. Baffles and traps are used to reduce backstreaming. Baffles are located at the top of the pump and may be passive or refrigerated. The baffle is intended to block a direct path out of the pump and allow recondensed pump fluid to drain back in. Of course, blocking a direct path out of the pump will also block a direct path into the pump and thereby reduce the pumping speed. Refrigerated baffles are more effective in condensing pump oil. Both liquid nitrogen cooling and conventional refrigeration are used. A trap normally refers to a separate vessel inserted between the pump and the chamber. Liquid nitrogen cooled traps are common and frequently consist of an inner cylinder containing liquid nitrogen and an outer cylinder serving as the vacuum wall. At Meyer Tool, we always use a liquid nitrogen cold trap between the test object and high vacuum pump, whenever we utilize a diffusion pump for high vacuum pumping.

With no moving parts, diffusion pumps are able to operate for many years with little or no maintenance. The heating element will eventually require replacement; however, this is a simple and inexpensive repair. Diffusion pumps will generally outlast all other pumps. Blockage of the water cooling lines can eventually occur.