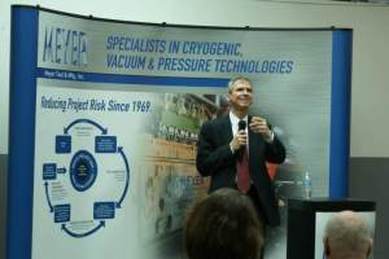 Congressman Dan Lipinski
Meyer Tool & Mfg., Inc., a small woman owned, second generation manufacturing firm located in Illinois, hosted U.S. Rep. Dan Lipinski at their high-tech manufacturing facility on Monday, April 11, 2011. Rep. Lipinski was interested in learning more about the products Meyer Tool’s highly skilled workforce produces. Meyer Tool was excited to provide the congressman with a first-hand look at the impact manufacturing has on America’s ability to provide global leadership, enhance American competitiveness and create jobs. The agenda also included the importance of basic national science initiatives and the value of early and meaningful partnerships between the national laboratories and industry; partnerships that lead to reciprocal technology transfer and ultimately commercialization of next generation technologies.

After a brief meet-and-greet, Rep. Lipinski toured the Meyer Tool facility with Eileen Cunningham, President and Ed Bonnema, Vice President of Meyer Tool. During the tour the congressman noted that most of the equipment and work stations he was seeing weren’t significantly different from other machining and fabrication shops he has visited. Both Ms. Cunningham and Mr. Bonnema pointed out that the key to Meyer Tool’s ability to build complex and cutting-edge products is Meyer Tool’s highly skilled engineering and manufacturing workforce. That workforce includes many long-term employees and a mix of new trainees being educated by the veterans.

The congressman has introduced the “Make It In America” agenda, a bill requiring the development of a national manufacturing strategy to boost traditional and high-tech manufacturing, spur American job growth and strengthen the middle class, all objectives employees at Meyer Tool can relate to. During the tour, Lipinski was able to see how a skilled and experienced manufacturing staff with a solid work ethic can turn standard machine shop technologies into high-tech equipment that supports the ideology behind “Making It In America” every day.

Congressman Lipinski addressed the Meyer Tool employees and engaged in a question-and-answer session. In his address, he cited his support of science initiatives and manufacturing. He also expressed admiration for Meyer Tool’s impressive record of providing cutting-edge products for basic science and commercial applications. He encouraged workers, telling them that their skills are important to keep the country moving forward. Watch an excerpt of his employee address at YouTube.

After the tour, representatives of Meyer Tool, along with Ken Olsen, President of the Superconducting Particle Accelerator Forum of America (SPAFOA), Elizabeth Clements from Fermi National Accelerator Laboratory (FNAL) and Werner Huget of the Cryogenic Society of America (CSA), sat down over lunch to discuss pressing issues. Since Congressman Lipinski is a proponent of manufacturing in America, this was a great opportunity to provide him with fuel to support his stance with his colleagues back on Capitol Hill. Important topics of discussion included manufacturing’s support of American global leadership, competitiveness and the creation of jobs; the importance of basic science in the government budget, the value of early & meaningful industrialization leading to technology transfer between government labs and industry and the negative effect of the European value-added tax rebate on American competitiveness within the United States.

Success in manufacturing supports America’s global leadership, increases her competitiveness and fulfills her need for job creation. Manufacturing has led America out of every recession since the great Depression and this economy is no different. While low tech and low paid jobs may have gone overseas, high-tech manufacturing is growing, offering long-term stable employment opportunities in careers requiring a skilled and involved workforce. These jobs are hard to outsource to lower paid/lower skilled overseas workers, so they are here to stay. Meanwhile, the competition among employers for skilled job candidates is becoming fierce. The biggest challenge for manufacturers going forward will be to find employees with adequate skill sets to fill the jobs created by high-tech manufacturing growth.

Support of basic science in government budgets is critical to America’s future. We may not know today what will come from continuing basic research efforts in America, but we know something of incredible value will. History proves it. There are many examples of life altering innovation stemming from basic science and research. The most familiar example would be the development of the World Wide Web. The need for hypertext communication in the High Energy Physics community is what ultimately led to its development.

At this time, scientists estimate that there are more than 30,0000 particle accelerators in operation around the world, serving medicine, industry, energy, the environment, national security and discovery science. Examples of existing or possible, yet incredibly valuable, benefits resulting from accelerator technology include:Early and meaningful partnerships between the national laboratories and industry lead to reciprocal technology transfer and ultimately to quicker and cheaper commercialization of next generation technologies. Early partnerships allow labs and industry to learn from each other along the way, exchange knowledge and blend their expertise to develop more cost efficient and productive processes as early as possible in the journey from prototype and low volume to mass production.

Finally, we discussed promoting an equal environment for American industry to compete for America’s investment in these science programs. There has always been significant international cooperation among the research communities in countries participating in particle physics research. For example, the Department of Energy (DOE) makes an annual funding contribution to the program at CERN and has several hundred researchers participating in these important experiments in Geneva. These collaborations have led to major scientific breakthroughs over the years. However, many foreign governments have policies which create uneven playing fields when it comes to procuring hardware for these experiments, hardware that American manufacturers are competing for. For example, European Union countries competing for U.S. government contracts have the European Union 17% value-added tax refunded when they export their goods to the U.S. As a general policy, many National Labs solicit bids from international suppliers as well as American suppliers, giving off-shore suppliers a significant competitive advantage. The DOE should establish a procurement policy which levels the playing field for these high-tech purchases being made with American taxpayer dollars.

The 2005 National Academies’ report, Rising Above the Gathering Storm, issued a national call to action to address America’s crisis in investment in technologies that will ensure the future prosperity of the nation. Congress and two administrations have committed to addressing this crisis through the America COMPETES Act. While America does need to get our federal budget under control, we simply cannot afford to cut off the investment in our future that the support of basic science programs represents. We need to support this investment, recognize and promote early and meaningful partnerships between the national laboratories and industry and promote fair trade policies that provide a level playing field for American businesses to ultimately protect America, her competitive edge and our nation’s and our children’s future.
​
Everyone at Meyer Tool & Mfg., Inc. would like to thank Rep. Lipinski for spending time at our facility and listening to our concerns. This was an exciting visit for us and we are pleased that he is not only willing to connect with manufacturers in his district, but pursued doing so! Good luck to Rep. Lipinski as he pursues a pro-manufacturing, pro-science agenda for the nation’s benefit.