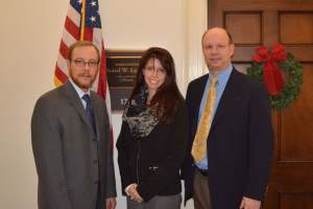 Illinois Rep. Dan Lipinski's Chief of Staff Eric Lausten meets with Meyer Tool's Eileen Cunningham & Ed Bonnema
Despite a nation-wide arctic blast, the Superconducting Particle Accelerator Forum of America(SPAFOA) held its annual Capitol Hill Briefing on December 11, 2013, on a surprisingly mild day in Washington, DC. The briefing was well attended including Meyer Tool President, Eileen Cunningham and Vice President and SPAFOA board member, Ed Bonnema. This annual collaboration of industry and congressional representatives is a critical opportunity to get the word out regarding the long term impact that basic scientific funding and industrialization efforts, or lack thereof, will have on the United States economy.

Ken Olsen, President of SPAFOA, welcomed participants, providing an overview of SPAFOA’s mission. The industrial forum, comprised of U.S. based companies or subsidiaries, shares a common goal: to promote the participation of U.S. based industry in major federally funded particle accelerator projects and develop the expertise within industry to apply this technology to the commercial marketplace. The forum provides a vehicle to integrate the resources of the U.S. industrial base into the research, development, manufacturing, construction and operation of major programs based on superconducting radio frequency (SCRF) accelerator technology. As a group, we need to improve public perception of accelerator technology and spread the word that a strong commitment and appropriate funding levels are critical for the United States to be a leader in this growing area of research and technology and in the resulting commercial and scientific applications. Industrialization provides the foundation for industry to grow, pay taxes, train workers and provide stable jobs in high tech manufacturing. If we forgo these efforts now, U.S. based industry will be handicapped with regards to European and Asian competitors in our ability to economically compete for the next generation SCRF components for accelerator physics.

Reps. Bill Foster (IL-11) and Randy Hultgren (IL-14) attended and spoke. Rep. Dan Lipinski (IL-3) was also a scheduled speaker. Unfortunately his flight was delayed and he missed the meeting. Lipinski has attended all previous SPAFOA Capitol Hill briefings and is a strong and vocal advocate of basic science funding. We are proud to be from Illinois where these members of our delegation have the long term vision to understand how critical the support of the basic sciences is to our nation.

The Department of Energy was represented by Patricia Dehmer (presentation), Acting Director DOE Office of Science; Ms. Dehmer provided a Department of Energy Office of Science perspective on the future of accelerator based science in the United States. Key to the Office of Science’s mission is to provide users with the facilities that they need to do science. Over 40% of the Office of Science’s budget is used to support user facilities. Light sources are currently the dominant type of accelerator based research facility drawing the majority of users. While the United States is currently the leader in light source based science, we will be seriously challenged for our leadership role – in fact, Ms. Dehmer cautioned – we will lose this leadership unless new unique light sources are built on American soil. The findings of the Basic Energy Sciences Advisory Committee (BESAC) in July 2013 was a call to action that caused the DOE to significantly alter existing plans for upgrades to current light source and the construction of new light source facilities. Two immediate results were the changes in the Advanced Photon Source upgrade plan and the altering of Linac Coherent Light Source-II (LCLS-II) design parameters to meet all the BESAC recommendations for a new FEL light source.

When asked about the Office of Science’s plan to review other accelerator based science areas, Ms. Dehmer stated that this had already been done for nuclear physics and would be done this spring in the area of high energy physics (HEP). At Meyer Tool we hope this HEP review has the same effect of energizing and focusing the HEP community and will lead to funding being provided for this critical area of science.

Eric Colby (presentation), also from the DOE Office of Science, updated the forum on the Accelerator R&D Stewardship Program. He reminded us that this initiative, started as a result of the 2009 Accelerators for America’s Future Workshop, has the mission to provide support to fundamental accelerator science and technology research and development for a broad range of science. Proposed programs will be managed by the Office of High Energy Physics with close communication with stakeholder agencies. They are hoping to solve specific problems within 5-6 years including particle beam delivery for cancer therapy, ultra-fast laser technology for accelerators and innovation for energy and environmental applications. Part of the goal, of course, is to make accelerators smaller, faster and cheaper. They are also committed to broadening the relationship between accelerator stewardship and a national network for manufacturing innovation which will ultimately enhance U.S. manufacturing competitiveness.

Foster, a former Fermilab physicist, professed that a continual healthy R&D effort must be maintained to support continued U.S. capability in these critical accelerator technologies. The boom and bust cycle of project based funding makes it difficult to maintain an industrial base. Unfortunately, though, the discretionary budget is under attack. Congress is presently debating the sequester budget cuts and has to deal with the DOE ITER program cost overruns. This makes it difficult for the overall funding picture. Despite the ITER fiasco, DOE is very capable of building large basic science facilities. A great example is the Brookhaven National Lab NSLS-II which is finishing on time and under budget. We need to ask ourselves, “How do we reverse disinvestment in science?” We know that roughly half of all economic growth since World War II is technology related. Just as early childhood development is a long term investment in our future; our R&D efforts are another long term investment that is as critical as the technology we are developing is important to maintaining international leadership. But as a nation, we systematically underinvesting in basic science because there is no visible short term pay off. Memory of past activity, both successes and failures, is fading in Congress, meaning we don’t have wisdom or maturity in Congress to see how we will overcome project challenges. So SPAFOA must continue efforts to educate every new generation of Congress. If we can get the public to view investment in science as a priority, then Congress will listen. It is not possible to monetize a discovery like that of the Higgs boson. However, if the discovery can inspire our children to become scientists, then our future is ensured. Foster complimented all those who made the investment to attend this meeting. He urged that SPAFOA continue in its efforts to educate and communicate with Congress and not give up the fight.

Hultgren echoed Foster’s sentiments. It is important for America’s future of remaining an innovative nation. The SPAFOA members’ message needs to be heard so we continue to have the opportunity to be on the cutting edge of science and technology. If we as a nation fail to take the lead, other governments will. For example, because we failed at the SSCL, the Large Hadron Collider was built in Europe. U.S. scientists are involved in discoveries at LHC, but wouldn’t it have been nice to have had the facility built on U.S. soil as well? The congressman believes the national laboratory efforts provide an economic impact that can be enhanced by giving them more authority to promote commercialization. He is working in his assignments to the Science, Space and Technology Committee and Finance Committee to promote support for basic science. Hultgren echoed Foster’s thoughts on the importance of engaging and inspiring children in the sciences. He is optimistic because he sees this excitement for science and technology in children he visits in his district. Igniting that spark in our kids is worth our effort. Hultgren thanked the industry partners who took the time to participate in this Capitol Hill meeting to help educate Congress.

Adam Rosenberg, Minority Staff Director, Energy Subcommittee, House Science and Technology Committee, shared the good news that today there is strong agreement on science committees, good things are happening and it’s important for the nation. There are two bills in draft form circulating. The majority bill is the Einstein Act and the minority bill is the Second Re-authorization of America Competes Act. (3rd total authorization). Rosenberg highlighted the similarities and differences in the bills. Both bills work to expand energy innovation to include more tech transfer or at least garner ideas for tech transfer into the bills. The America Competes Act would authorize greater funding levels.

The recently appointed Fermilab Director, Nigel Lockyer (presentation), gave a perspective on the future of Fermilab which involves neutrino science including the Long Base Neutrino Experiment (LBNE), a significant current and future investment in SRF technology, and industry/laboratory collaboration at the Illinois Accelerator Research Center (IARC). FNAL’s involvement in the construction of the LCLS-II program was also discussed.

Harry Weerts (presentation), Director-HEP at Argonne National Laboratory, spoke about the progress and status of the International Linear Collider (ILC) including the potential Japanese site. There is currently global support for the plan to build the ILC in Japan as an internationally funded project. The process to accomplish this however will be long one. The timeline proposed by the Linear Collider Collaboration (LCC) includes reaching international agreement by 2016, with construction to begin in 2018 and be completed in 2027.
​
Rounding out the day, six SPAFOA industry members provided an accelerator industry outlook from their perspective. Rolland Johnson from Muons, Inc., Chase Boulware, Niowave, Inc. (presentation), Todd Treado, Communications & Power Industries, Inc. (presentation), Tony Favale Advanced Energy Systems, Inc. (presentation), Ed Bonnema, Meyer Tool & Mfg., Inc. (presentation), and Dr. Marcel Gaudreau, Diversified Technologies, Inc. all spoke. Examples of successful national laboratory/industry collaborations and technology transfers and the resultant positive side effects, e.g. job creation and reinvestment in the U.S. economy by increased tax revenues were discussed. Mr. Favale made an impassioned presentation for the DOE to treat the LCLS-II project in the same manner the European Union manner treated the X-FEL project; restrict construction participation to U.S. based companies using U.S. workers. The U.S. Federal Acquisition Regulationsexplicitly state that that this exclusion can be imposed when it is in the public interest. In the short-term this creates immediate high tech jobs for the U.S. based accelerator industry. Long term it will build and strengthen the U.S. industrial base for SRF, positioning American industry to compete on a level global playing field.
​
SPAFOA’s Capitol Hill Briefing was a call to action. Members of Congress, our leaders at the national laboratories, and industry must partner to educate decision makers and the general public regarding why today’s investment in science and technology is in America’s long-term interest. Failure to act with this vision will lead to the loss of our current status as the global leader in innovation and scientific research. We must have a proven engine of economic development to sustain us, to ensure this century is the second American century.