Kevlar, a trademark of DuPont, is an "aramid" or aromatic amide. It has a very high strength to weight ratio. The specific gravity of Kevlar is 1.44 while the tensile strength is 3.5 GPa (500,000 psi). Kevlar is available in three grades, 29, 49 and 149, and the properties differ somewhat from one grade to the next. When Kevlar is spun the long polymer molecules tend to align along the axis of the fiber and the resulting fiber has some properties that are not isotropic. Kevlar fibers have a negative coefficient of thermal expansion along the axis of the fiber. Kevlar has been used as a replacement for steel in tires, as a component for helmets and as a material for sails among other applications.
​
The high strength and relatively low thermal conductivity of Kevlar (0.14W/mK at 100K) make it an interesting choice for thermal supports in cryogenic vessels, particularly in applications in which a very low heat leak and/or low weight are required. Kevlar has higher strength in tension than in compression, so to take best advantage of its properties the load would be suspended by strands or cables under tension. In spaceflight applications a Kevlar support system has been used to suspend a 3-He refrigerator. In zero-gravity the support system must prevent both motion and rotation of the load and must be maintained under tension to take up the expansion of the Kevlar as it is cooled. A similar support system has been used to support an adiabatic demagnetization stage of a refrigerator in an aircraft-based far infrared telescope. In more conventional ground-based cryostats Kevlar has been proposed as one of the elements in the CUORE experiment dilution refrigerator, which is to be installed at the Gran Sasso Underground Laboratory in Italy. In this experiment a total mass of 3300 lbs is to be cooled to 0.01K. 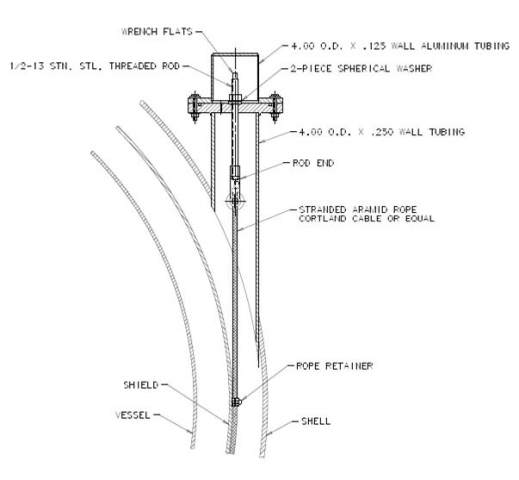